Going to the prom is a rite of passage that every high school girl anxiously anticipates – most of the time. A mom entered the shop with her daughter, sharing the unfortunate news that her husband had just lost his job; finances for an extravagance as a prom dress were not in the budget – even though the dress had been promised to the senior in high school. With little hope, the girl shuffled to the After-Five rooms in search of something that might be “acceptable” under the circumstances. To her amazement, she found three dresses that she fell in love with! Rather than a “make due” substitute, she had a difficult choice! Her younger sister, who was also attending the prom at her own expense, was stunned by the significant savings. She boldly returned her prom dress to the big department store and came to Treasure House Fashions where she also found three dresses that she loved. After paying a fraction of the cost for her dress, she giggled to realize she now had leftover funds for nails, hair appointment and a little extra. Mom and the girls were thrilled with the lesson in savvy shopping! 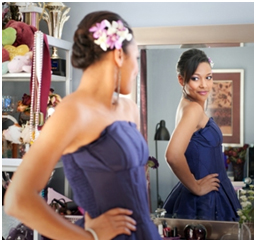