When “Ashley” (identifying information changed to respect confidentiality) was 15 years old, she was gang-raped; they also burned her arms with cigarettes. As a result, Ashley had twin boys – she loves them deeply, but her sense of self was shattered. She turned to drugs and alcohol and eventually took to the streets to make a living. She was arrested for prostitution and court ordered to a redemptive program called PRIDE; she received treatment for her addictions, got extensive counseling, and began a work program. PRIDE referred her to Treasure House Fashions for clothing. As Cindy helped her find suitable clothing for her job, Ashley shared her personal story. When Ashley left, Cindy and Sally hugged each other and cried – tears of anger and pain (no 15 year old child should ever have to endure that abuse) and tears of gratitude for having a rich reservoir of resources to affirm her journey. At her agency, Ashley gushed over each item she’d received… but she said the best part was that she was treated with such dignity! 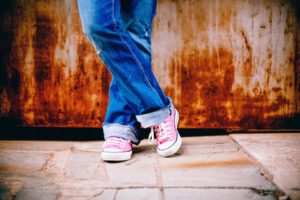